Other manufacturers are in on the act too. The Xiaomi Mi 9 delivers 20W wireless charging, while the Mi 9 Pro 5G extends this to 30W of wireless juice. Oppo also has its own 30W technology and companies are testing technologies that could push 40W over the air. By comparison, some wired charging solutions are barely breaking the 25W barrier. This includes out of the box solutions from Samsung, LG, Google, and others.

We have Huawei’s 27W wireless charger in house and decided to put it up against the Huawei Mate 30 Pro’s supported wired charging standards to see how the technology compares. We’re not expecting it to beat Huawei’s proprietary 40W SuperCharge technology. But can 27W wireless charging outpace the common USB Power Delivery and Quick Charge 3.0 standards?

Before diving into the results, let’s take a close look at what you get with Huawei’s 27W SuperCharge wireless charger.

The charger is based on the Qi wireless charging standard and is TUV safety certified. As well as the powerful 27W mode, the charger also supports devices that require 15, 10, 7.5, and 5W of power. The device is powered by a USB-C port which requires a 5-10V, 4A input. To achieve the maximum 27W speed, you’ll need to use a Huawei 40W SuperCharge wall plug and a 5A USB-C cable. Fortunately, Huawei includes these in the box. You’ll also need a compatible device, such as the Huawei Mate 30 Pro.

The charging puck itself is small and lightweight, taking up hardly any room on your desk. It weighs 105 grams and its dimensions are 90mm in diameter and 21.85mm in height. The wireless charger comes in just one colour – Space Grey – which is pictured below.

Now onto the total charge times. Here we drain the battery down to zero and charge up completely to 100%. To gauge the total amount of power provided by the various standards, we plugged a multimeter in-line to record the charging voltage and current. This way we can compare the power levels and charge times against one another.

The headline here is that 27W wireless charging is actually faster at charging the Huawei Mate 30 Pro than both USB Power Delivery and Quick Charge 3.0 accessories. A whole 34 minutes faster. Although we should note that Huawei’s implementations of these standards are a little slower than other manufacturers. Huawei’s USB Power Delivery implementation clocks in at 12W versus 15W supported by the Samsung Galaxy S10 range and Google Pixel 3 series. Even so, Huawei’s wireless option outpaces all of them with 27W of power.

What about shorter top-ups?

To get a better look at how useful wireless charging is for shorter top-ups, we also tracked the full charging cycle of each of these technologies. The steeper the curve the faster the phone charges, making this a valuable way to see how charging speed varies at different charge percentages. 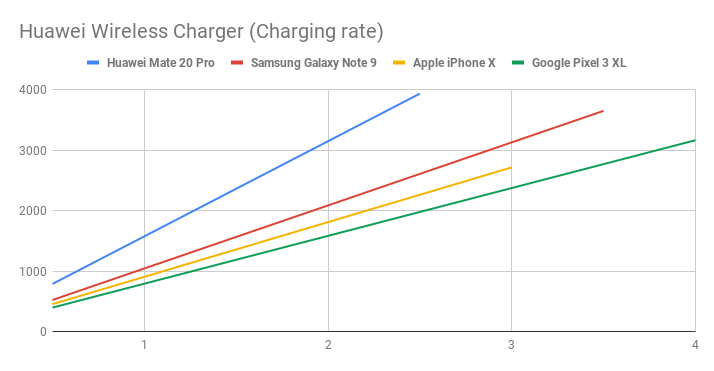 Huawei’s 27W wireless charging holds up well here too. There’s a steeper curve at battery levels under 25%, helping to boost charging time from empty. Just 15 minutes on the pad yields a 27% charge, while half an hour provides almost half a full charge. Huawei’s 40W wired option powers the phone up by 36 and 68% respectively during the same time frames. 40W SuperCharge is the fastest option when your battery is low on juice, but the wireless charging solution isn’t miles behind.

Huawei’s 27W wireless charging technology is clearly impressive. While obviously not as fast as the company’s blazingly quick 40W wired charging solution, 27W worth of power over the air is faster than some popular wired charging standards out there.

If you were wondering whether to buy third party USB Power Delivery or Quick Charge accessories for your desk, Huawei’s 27W wireless charger is actually a faster way to charge the Mate 30 Pro. Best of all, it supports the Qi standard and charges other devices too, albeit at slightly slower speeds.

An hour on the wireless charging pad won’t quite get you to full capacity, but ~85% battery is more than enough to get you through a full day’s use with the Mate 30 Pro. Even a half an hour’s wireless charge provides a big with enough top-up to keep you on the go. At 27W, wireless charging is finally powerful enough to be a viable charging solution.